This summer’s international European Studies conference for PhD and early-career scholars addressed the theme ‘What for the Next European Century?’. Kindly hosted by the Metropolitan Manchester University, it brought together over 50 delegates from dozens of universities, representing the next generation of researchers on Europe and the European Union (EU), for two days of research presentations, plenary sessions and interdisciplinary exchange. 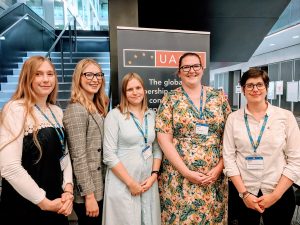 The conference attempted to reflect on the significant changes and challenges faced by Europe in 2019. In particular: the UK was set to become the first member state to leave the EU, the European Parliament elections would determine future direction of integration, and there were continuing challenges in terms of migration, climate governance and trade, as well as cooperation with non-EU countries. Alongside this, 2019 also marks the anniversary of momentous times in Europe’s past such as the peace accords following the end of WWI, the establishment of the League of Nations and the fall of the Berlin Wall.

All these events have represented changes to Europe’s place in the world order. The aim of the UACES Graduate Forum 2019 (GF 2019) was the to look upon uncertain times with academic favour – to take stock of the past and think ahead to consider possible futures for Europe.

Our delegates examined a range of aspects of this theme from a variety of European Studies disciplines and related areas, such as Political Science, Law, International Relations, History, Economics, Sociology, Geography and Anthropology.

UACES Chair – Dr Nicholas Startin (University of Bath) opened the conference with a talk on: ‘The 2019 EP elections and the Consequences for the European Union’. He provided an insightful discourse on European trends, the complexity of institutionalism of the EU and the history of European elections based on the qualitative data on European Parliament election turnout from 1979 to 2019. He also identified the main issues that are strongly impacting Euroscepticism, and the European Council’s decision-making on the ‘top 5’ EU jobs.

Dr Startin specified the main issues surrounding the decision-making process in the EU institutions and how this process impacts the trust of EU citizens in the EU as a whole. He argued that it was not only Euroscepticism, but the idea of Europe itself, that that was becoming an increasingly important issue to address. 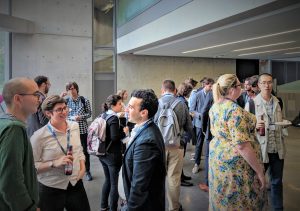 Conference delegates during the drinks reception

The conference delegates then participated in 13 research panels, to present and discuss one another’s research. The sessions reflected a wide range of issues on the contemporary Europe, including Retheorizing Europe, EU institutions, EU Security and Justice & Home Affairs, Challenges to Democracy, Rule of Law and Human Rights, EU Members & Neighbours.

I personally had the pleasure to act as chair and discussant a panel on ‘Home Affairs and Security’, in which the presenters, Yichen Zong, Neza Subic, Filiz Doğan and Eva Saeva shared their expertise and perspectives on topics relating to European Security. The common theme of the panel could be summarised as follows: Justice, Home Affairs & Security is an important and complex area of law that cannot be addressed in isolation but needs to be resolved globally. On the one hand, we can observe the EU’s attempts to gain more power to address these issues transnationally and on the other, we can see resistance of Member States focused on protecting their own sovereignty.

The conference closed with a fascinating roundtable entitled: ‘Europe in times of rising populism: What to expect in the future?’

Simona Guerra (University of Leicester) addressed the EU’s biggest challenges. She discussed the democracy deficit, political fragmentalism and the question of whether Euroscepticism is on the rise. She discussed the importance of critical inquiry into how Euroscepticism is analysed, and emphasised reasons to be positive about the EU, which is still relatively well-trusted.

Andrea L.P. Pirro (Scuola Normale Superiore) gave an insightful talk on the financial and migration crisis and populism. He observed that there are more pressing challenges for the EU, beyond austerity and solidarity, and, more importantly, the EU has pressing tasks in terms of promotion of liberal principles and liberal trajectories, such as freedom of speech and democracy, etc.

Anne Schulz (Reuters Institute, University of Oxford) discussed EU climate change and how to engage with different audiences on varied levels. She brought up the example of people who do not have access to transport, and how this inequality is often exploited by populist politician for their own interests. She also highlighted financial challenges for journalists, dropping trust in media in the UK and finally, she suggested that every researcher has a moral obligation to protect liberal democracy.

Simon Usherwood (University of Surrey) explored the phenomenon of disconnection from political systems. He noted that there are structural problems in the EU, namely constitutionalisation and democratisation. He observed that the EU faces some challenges, but at the same time, its ability to create consensus should be applauded, as the politics will never stand still and there will be always challenges and we need to find solutions to some of the problems. He highlighted that the EU needs to think about the past and be able to recall what we have learnt from the past to be able to address the present issues in contemporary Europe. In particular, Dr Usherwood emphasised an importance of setting agenda, identification of the appropriate process that would match with the demanded outcomes and also searching for different models and varied frameworks to achieve the same outcomes. He also underlined the need for an effective communication to discuss pressing issues.

This two-day conference provided a friendly environment for postgraduate and early-career researchers (ECRs) to present their work, to receive feedback and to have dialogue with each other. It offered an ideal introduction to the UACES community for new members.

To take advantage of future UACES events and opportunities: 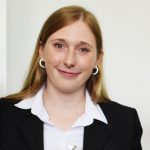 Kamila Feddek is an EU law researcher at the University of Glasgow who has recently completed a PhD thesis titled: “The protection of the right to free movement and social security in the EU: law and practice”. Kamila is also a financial inclusion manager. Kamila is Book Reviews Editor for the Journal of Contemporary European Research (JCER) as well as an active Committee member of the UACES Graduate Forum.