Counter-terrorism policy has never been such a prominent policy area in EU enlargement as it currently is. In recent years, the EU has put security policy, and in particular counter-terrorism policy, high on the agenda of the accession processes of the South East European EU membership candidates Albania, Montenegro, North Macedonia and Serbia, and the potential candidates Bosnia and Herzegovina and Kosovo. In this contribution, I sketch out three trends and practices that define the EU’s approach to counter-terrorism, an increasingly important policy area of enlargement: regional cooperation, externalisation of internal policies, and prioritisation of preventive counter-terrorism strategies over hard measures.

Not a new, but an increasingly highlighted enlargement topic

Even though counter-terrorism has never been as prominent for EU enlargement as it is currently, it is not a new topic within the field of enlargement. Indeed, counter-terrorism cooperation has previously been relevant to enlargement. For example, during the negotiations with Turkey, Croatia, Bulgaria or Romania, as well as in relations with non-EU states such as Ukraine or Moldova. However, with the ongoing enlargement towards South East Europe, counter-terrorism policy has changed – the scope of engagement on the topic has widened and a variety of levels of governance have become involved.

Since the departure of foreign terrorist fighters from South East Europe to Syria and Iraq as of 2011, the EU has put more emphasis on counter-terrorism in accession negotiations. The Commission’s 2018 Western Balkans strategy puts a particular emphasis on home affairs. Meanwhile, counter-terrorism and the prevention and countering of violent extremism (P/CVE) are part of one of six flagship enlargement initiatives. While the Commission’s Instrument for Pre-Accession Assistance (IPA) 2014-2020 had already assigned significant funds to counter-terrorism and P/CVE projects, the new IPA 2021-2027 will reflect the increasing focus on counter-terrorism policy by providing even more funding for related activities. Moreover, the 2018 Joint Action Plan on Counter-Terrorism for the Western Balkans is becoming increasingly part of the enlargement assessment. It is included in chapter 24 on justice, freedom and security, which is a prioritized chapter since a reform in 2012.

The EU’s priorities and practices regarding counter-terrorism policy in South East Europe show certain trends. Firstly, regional cooperation is a guiding principle of enlargement, beyond the realm of counter-terrorism. In the area of counter-terrorism, regional cooperation is particularly pursued with reference to terrorism being a mobile activity that crosses borders, ethnic lines and political differences. Moreover, the underlying assumption is that the challenges which the South East European states face with regards to terrorism and extremism are comparable. The Commission does not cease to highlight that rather than pursuing progress in counter-terrorism policy bilaterally, it prefers using a regional approach because of the “good neighbourly relations” that should be promoted through the enlargement process. An expression of this approach is the 2018 Joint Action Plan on Counter-Terrorism for the Western Balkans which was developed from several high-level counter-terrorism dialogues between SEE and EU representatives. The Joint Action Plan was negotiated on a regional level between both, SEE and EU representatives. Another important instrument reflecting this approach is the regional network of national Countering Violent Extremism coordinators in South East Europe. The network is chaired by the EU’s regional counter-terrorism advisor who is based in Sarajevo and was appointed specifically for South East Europe. The EU asked the South East European governments to appoint a national Countering Violent Extremism coordinator as a single contact point to participate in this network and to coordinate on policies with states in the region.

Secondly, in relation to counter-terrorism and P/CVE in enlargement, the EU has externalised some of its internal policies in these areas. Not surprisingly given the nature of the enlargement framework, the aim is to introduce EU-minded policies and practices in these policy areas. Therefore, there is a strong coherence between the EU’s internal and external counter-terrorism policies, in particular in relation to South East Europe. A good example of this approach is the Radicalisation Awareness Network (RAN), a Commission-led network of practitioners working on (de)radicalisation. It is sought to be replicated in a two-fold way in the region. The Commission aims at integrating the South East European states into the EU-wide RAN as well as, in the long run, implementing a regional version of RAN. This again reflects the preference for regional cooperation in the EU’s strategy.

Thirdly, what is broadly referred to as counter-terrorism cooperation is clearly prioritising P/CVE activities, or so-called soft measures, over hard measures such as police work and law enforcement. While the EU engages in both dimensions of this work in South East Europe, more attention is given to P/CVE than to counter-terrorism activities. This is also underlined by the EU’s current priority topics of counter-terrorism policy: the prevention of radicalisation and the return and de-radicalisation of foreign terrorist fighters and their families. With this focus on P/CVE activities the EU has treated projects employing a so-called whole-of-society approach preferentially. This means that in its activities, the EU supports the use of a P/CVE approach which brings together a broad range of local authorities and institutions, such as doctors, psychologists, social workers, teachers, etc.

Given the relative novelty of enlargement focused on counter-terrorism, it will be crucial to accompany the integration in this policy field with academic analysis. For example, a question that arises from the three patterns sketched above is, what role does counter-terrorism play in the overall political integration of EU enlargement? 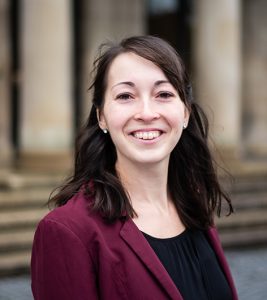 Magdalena König is a PhD researcher at the University of Groningen in the Netherlands. Her research interests include EU enlargement, counter-terrorism politics, and the politics of prevention of radicalization. In her PhD research, she examines the role of preventive approaches to counter-terrorism within the ongoing EU enlargement towards South East Europe. Magdalena has a BA in European Studies from Maastricht University and a MA in Peace Research from the University of Tübingen.