Since the Second World War, the international community has sought to prevent the repetition of destructive far-right forces. Nevertheless, violent far-right entities have recently received unprecedented electoral support. In light of the current reality, a new book by UACES member Natalie Alkiviadou critically assesses the international and European tools available for States to regulate the far-right. 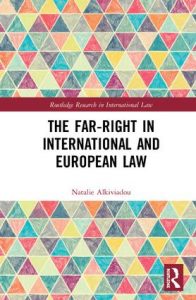 Far-right movements are not easily conceptualised. There is a lack of consensus as to their definition and the boundaries between between different terms remain blurred. In fact, the words ‘populist, neo-nationalist, far right, radical right and extreme right are often used interchangeably.’

Taking into account the inherent difficulties in finding a definition, my new book looks at the far-right as an ideology which contravenes the spirit and values of a functional human rights culture, as these rights have been promulgated by the Universal Declaration of Human Rights and subsequent documents. In essence, far-right entities ‘reject the principle of human equality and hence are hostile towards immigrants, minority groups and rising ethnic and culture identity’.

Since the Second World War, the international community has sought to prevent the revival of destructive far-right forces by establishing institutions, such as the United Nations, and by adopting documents such as the Universal Declaration of Human Rights. For example, Article 4 of the International Convention on the Elimination of All Forms of Racial Discrimination prohibits racist speech and associations. In cases such as Norwood v the United Kingdom and Vona v Hungary, the European Court of Human Rights has found hateful speech and associations respectively to fall outside the Convention’s protection.

Nevertheless, despite the international community’s commitment to preventing the far-right’s resurgence, violent far-right entities, such as Golden Dawn of Greece, have participated in parliament and have committed systematic crimes, including murder. France’s National Front and Italy’s Lega attained first place in their respective countries in the latest European elections, while countries such as Hungary and Poland are being led by right-wing populist parties which are instigating constitutional upheaval and violating basic elements of doctrines such as the rule of law.

Through this assessment, I consider the objectives, scope and possible shortcomings in this sphere. Looking at both the Council of Europe and the EU, I assess the tools available and consider whether restricting fundamental rights and freedoms, such as expression, association and assembly, is an effective framework through which to tackle the far-right.

By incorporating an assessment of the key United States (U.S.) jurisprudence related to far-right hatred (e.g. cross burning and the Klu Klux Klan) I address the question of whether rights should be restricted. This allows me to demonstrate the stark disparity between the European/United Nations and U.S. conceptualisation and treatment of freedoms (particularly that of speech) within the framework of a far-right ideology. Ultimately, neither approach to handling far-right expression and groupings can be defined as more effective than the other, since the far-right has flourished in both settings.

Going beyond a theoretical and legal analysis of rights’ restrictions, I argue that the international community needs to examine the neo-liberal roots of far-right extremism and make a sincere effort to tackle socio-economic inequalities, nativist constructions of identities and the normalisation of exclusionary approaches to vulnerable groups. Otherwise, the far-right phenomenon will be here to stay.

There is a wealth of analysis of the phenomenon of the far-right in academic spheres. In Political Science, for example, academic discussion has considered, inter alia, both general and contextual trends and developments of the far-right[1] and the nature of the far-right as a political and/or non-political structure, with focuses on particular areas or regions,[2] the socio-economic and interpersonal reasons leading citizens to join the far-right electorate[3] and the advantages and disadvantages of proscribing far-right groups.[4]

As such, and taking into account the recent rise of the far-right in an electoral and non-electoral ambit, this book is relevant for academics with an interest in international, European and human rights law, political science, and related disciplines. It will also be of interest to members of civil society, politicians and relevant stakeholders on a national and European level.

Please note that this article and represents the views of the author(s) and not those of UACES, JCER or the UACES Graduate Forum. 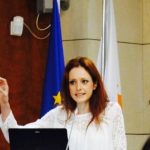 Natalie Alkiviadou is a lecturer in European Union Law and Human Rights at UCLan Cyprus. Her research interest lie in the far-right, populism, hate speech, hate crime and non-discrimination. She is the academic coordinator of the Jean Monnet Module EU-POP on Populism (2019-2022).