In 2017, the parliament of Catalonia (Spain) unsuccessfully declared the region’s independence after several years of intense secessionist politics. Three years before the Catalan bid for independence, the Scottish people had voted to remain in the UK in a referendum on the constitution. After Brexit, however, this issue is far from settled. Movements of sovereignty are also found in Flanders (Belgium) or the Basque Country (Spain). Although some authors had held that nationalism was a phenomenon of the past that would disappear with globalisation, Europe is living instead an “age of secession” or, at least, an age of secessionist politics.

In democracies, due to the importance of persuading voters for movements to achieve their goals, discourse emerges as a crucial variable with enough potential to trigger radical constitutional change. This post contributes to our understanding of secessionist discourse by outlining how minority nationalist parties frame secession, namely, how they describe and justify independence. In my research, I have identified four main frames that are always present in pro-independence parties’ propaganda: the sense of acting on behalf of a distinct community or nation (communitarian component), the mobilisation around perceived grievances against the host state (remedial component), the desirability of being ruled by themselves (self-government component) and the achievement of sovereignty as means of accomplishing several policy goals such as improving people’s lives (instrumental component).

Regarding the former, secessionist parties always claim to act on behalf of a distinct human group that lives in a perceived Homeland, namely, a nation. This group is allegedly different from the rest of the population of the host state. An example of this situation would be the case of the Scots in the UK or the Catalans in Spain. Therefore, the minority nation they claim to represent is the “imagined community” around which the case for independence is built, that is to say, Scotland or Catalonia – following the same example. Hence, the first strand of discourse stresses nationhood or the existence of a group with an “encompassing culture” as the source that legitimates secession: “we are a nation; therefore, we deserve independence”. Following this rationale, independence is the “normal” state for nations in the world.

However, this distinct human group would have few reasons to undertake the risks of creating its own polity if its current situation were satisfactory. To put it in other words: if the union were positive for the minority group, there would be no need for them to secede. Therefore, a discourse around constructed or perceived grievances is also always present: nationalist entrepreneurs try to mobilise the population through a “distancing rhetoric” from the host state. Achieving statehood would remedy the mistreatment exerted by the central authorities against the minority group. In European democracies, secessionist parties tend to advance “soft” remedial arguments for independence based on an unequal distribution of power, resources, and/or status. it is typical for nationalist parties to complain about the “fiscal plundering” against their region, the inadequate protection of the local language and culture or the central government’s encroachment on regional powers.

Thirdly, the desirability of achieving sovereignty or self-government as opposed to foreign or alien rule also underlies all the movements seeking self-determination. This discourse is the pure “independentist” argument for secession: it will always be preferable to be ruled by ourselves than to be ruled by others. Pro-independence parties state that their group is a permanent minority within the established polity, leading to a feeling of statelessness. In this regard, the minority will never control the state’s apparatus, and thus the majority-alien group owns the tools for ruling the secessionist community. As opposed to this, pro-independence activists argue that the policy decisions over the targeted group – including the decisions around its constitutional future – must be taken by this group, and not by the alien larger community.

Finally, all secessionist movements give their targeted population instrumental reasons to convince them to support independence. Therefore, attaining statehood is a means of obtaining particular goals in one or more policy areas: preserving the group’s culture, boosting the economy, improving the welfare system, etc. From this point of view, sovereignty would simply be the means of building a better country and improve people’s lives – thus, not simply a way to address grievances. As the Scottish government stated before the 2014 referendum campaign, “Scotland is not oppressed, and we have no need to be liberated. Independence matters because we do not have to powers to reach our potential”.

To summarise, we have seen that secessionist parties advance four main arguments to persuade people of the benefits of independence – based on identity and nationhood, grievances, self-government, and policy goals. The next question surrounds the combination of these arguments in independence parties’ propaganda platforms. Preliminary research shows that, maybe counter-intuitively, secessionist parties increasingly focus on the “material” benefits of independence by providing arguments based on improving people’s lives. Conversely, identity and nationhood, although present, are less prevalent in their discourse. Further research should explore why “ethnic entrepreneurs” such as minority nationalist parties do not stress identity-based arguments when making the case for constitutional change. The next developments in places such as Catalonia or Scotland will provide more clues to understand how these actors behave. What we know for sure is that, in Europe, secessionist politics are here to stay. 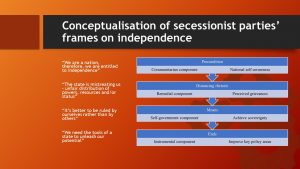 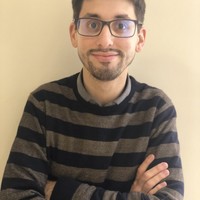 Carles Ferreira Torres is a Political Scientist, Assistant Lecturer and PhD Candidate in Comparative Politics at the University of Kent. He studies Territorial Politics, Nationalism and Political Parties.