The fields of migration studies and human trafficking research (especially in Europe) are diverse and well-researched. Much work has been done among vulnerable populations such as refugees, unaccompanied minors, and victims of trafficking, including their experiences, push and pull factors, integration, etc. However, more work is needed to understand their experiences beyond the legal and policy aspects to consider their mental health and psychosocial wellbeing in the countries of settlement.

The term stigma dates back to the Greeks, who cut or burned marks into the skin of criminals, slaves, and traitors to identify them as tainted or immoral people who should be avoided. Stigma, however, is more than a physical mark and comprises two fundamental components- the recognition of difference and devaluation. Simply put, recognising differences (which may differ from the norm) in a person and attributing less value to them because of those differences. Stigma, therefore, comprises of intolerance and discrimination. “Show a people as one thing, only one thing, over and over again, and that is what they become”.

My research, a longitudinal study, adopts a mixed-methods approach and addresses the psychosocial impact of human trafficking on young, Nigerian women in Italy. One of the main findings from 31 interviews was the prevalence of stigma. The majority of the young women expressed how they felt stigmatized during various aspects of the journey, including while transiting in Libya and after arrival in Italy.

Working with or carrying out research among victims of trafficking comes with unique challenges and ethical dilemmas and I discovered that stigma is one of them. The instances of (perceived) stigma experienced by this group and their interpretation of it determine how they relate with others – including researchers.

The interviewees were by virtue of being Black, irregular migrants automatically assumed to be working in prostitution. They described being treated unfairly and pestered by men who said that prostitution was the only job available to ‘people like them’. I gained a bit of personal insight into this reality when in different Italian cities, cars pulled up on the curb next to me and the male drivers asked me how much I charge. Since I was dressed semi-formally and carrying my laptop backpack, I can only deduce that they assumed I worked in prostitution based mainly because I am a Black woman.

Stigma was also experienced at the hands of caregivers as some of the staff assumed that Nigerians are always at fault. A participant shared information with an NGO staff who discussed informed consent with her and promised that the conversation would be treated as highly confidential. Yet, she found her full story, including intimate details, posted on the NGO website as the story of one of their ‘helpees’. This led to others including the shelter manager reading it and confronting her about parts of her story that she had hidden from them, including past experiences of violence and sexual assault. She was distraught and has since refused to trust any NGO staff.

Several participants had similar experience of distrusting people who wanted to ‘help’ them for fear confidentiality would be breached. Indicating that while many actors may have the interests of migrants at heart, some do not effectively take into account or respect the rights of the very people they claim to help.

There were also instances where the participants upon boarding a bus, noticed people covering their noses, making them feel out of place and unwelcome. Thereby, treating migrant bodies (or colour of their skin) as problematic, and devaluing it. These non-verbal indications of discomfort, or even displeasure, communicate a message of difference and that being different is bad.

These experiences of stigma, however, were not only external, they were also internal. Some of the women experienced stigma within the group; e.g. those who had children as a result of rape or who were unsure of the paternity of their children. Leading several of them to make up stories about who and where the father of the child was. It is very important therefore, that confidentiality is highly respected and honoured, and no information is taken for granted or discussed under the assumption that it is common knowledge.

Stigma among victims of trafficking is multi-layered and multifaceted and a topic that requires more research and attention. Since stigma exists in social interactions and not in isolation or solitude, it is imperative that the social contexts are taken into consideration as well.

In conclusion, I want to stress the importance of remembering that the rights of people in vulnerable groups must be respected. These include, but are not limited to, teenage victims of loverboys, victims of trafficking, undocumented migrants etc. Their rights to privacy and confidentiality should be respected like we would respect that of the citizen of an EU country. The recently released EU Pact on Migration and Asylum touches on several important aspects- one of which is ‘supporting legal integration into local communities’. This would be beneficial for my group of participants because it would help them be seen as humans who also desire to add value to society. It would begin the process of changing the narrative that portrays them as less than, and in some cases, a derogatory other.

It is important that actors like NGOs while trying to assist these people and raise the required funds for their organisations take extra precaution in telling the stories of migrants- their express consent without inhibition should be sought. As researchers, we must hold ourselves accountable for how we frame our work and communicate about our respondents because while absolute neutrality is impossible, having a nuanced perspective and an open mind is key. Stigma occurs in social interaction as mentioned earlier therefore, a regular evaluation of policies and programs is important to see what is being done well and what could be improved upon, what could in fact be stigmatising and what could be beneficial. 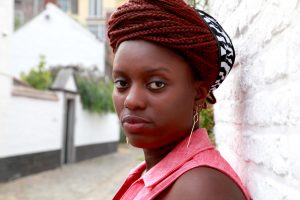 Sarah is currently a PhD candidate at Ghent University where she is part of the ERC funded ChildMove project and is conducting research on the impact of transit experiences on the wellbeing of unaccompanied minors. Her part of the project focuses on young Nigerian women that were trafficked into Italy for sexual exploitation. She is also the founder of CoCreate NGO.

November 14th 2012: “European Day of Action and Solidarity” or “Day of Rage”? | French appeals court decision is a victory for solidarity with Migrants | Regional cooperation, externalization, and prevention: trends and practices of EU counter-terrorism in EU enlargement | The study of ideas in EU-China disputes in the WTO | EU-China Strategic Partnership is at a Low but is it at its Lowest or is the Downward Spiral Only Beginning? |